skip to main | skip to sidebar

I was out on a clients yacht recently, and because we had little time to cover the items that I was on the boat for, I did not do my normal full range of checks before casting off. Sure enough as we were motoring home at the end of the day, the over heat alarm activated on the engine.

Once he had the headsail rolled out and the boat sailing, I opened the water filter which was the obvious place to start. It was one of those modern black plastic ones with the large screw top and cup shaped nylon mesh filter. On first inspection the filter was empty and clear, but when it was removed, there was a thick layer of algae on the outside of the filter. This algae was thick enough to stop the flow of cooling water to the engine.

Apparently there is a history of this engine doing this occasionally and instead of the owner checking the filter regularly and cleaning it prior to every trip, they only cleaned it when the alarm activated. Fortunately the engine had not over heated when they were in a confined space or hazardous situation. An engine never overheats when you do not need it!

I have never seen this happen before as on most engines the water in the filter slowly drains out when the engine is stopped so that any growth would die between uses of the vessel. However, this vessel has a saildrive unit and I think that this is what made the difference, the seal on the system must be good enough that the water filter was remaining full all the time, thus creating an ideal environment for the algae to grow.

Hopefully this cooling system will get checked before use every time in future!
Posted by Clive at 5:39 pm 1 comment:

I am off to the Maldives at the weekend for two weeks of diving. In the lead up to this trip I have been monitoring the weather in the Indian Ocean and its seems to be unseasonably wet, windy and cloudy out there at present. The rains should have eased off at the end of November but on some days recently there has been no sunshine and up to 6 or 7 cm of rain!

I am hoping that the weather clears up soon, especially at there is a tropical storm brewing on the other side of the Equator, I don't know this area well and am hoping that this may indicate a change in the weather over the area generally. Perhaps a local expert could enlighten me.

We have just been told today that Bandos where we were booked to go on Sunday is over booked and they have moved us to Sun Island, seems hard to believe that they managed to do this, but I guess one island is going to be much like another. From reading reports of holidays this does not seem to be unusual at Bandos. At least we will get a free sea plane flight out there which should be a memorable experience.
Posted by Clive at 3:27 pm 1 comment:

When we run skippering courses one of the skills we need to develop in yacht skippers is the ability to lead a crew.

I always find the difference in ability and styles of leadership amazing; there are so many different ways of achieving the same result. My normal approach as an instructor is to try to build on the abilities and personality of the trainee skipper rather than to impose my own style of leadership on someone for whom it may not be appropriate. Sometimes it is just a question of removing some of the rough edges from a natural leader and occasionally it may be necessary to build confidence and command presence in someone who has never told anyone what to do in their life.

When thinking about leadership models, examples from military experience are of obvious interest, the high stakes involved tend to produce exaggerated examples of the different styles that are employed.

One of my earliest leadership experiences was during the final stages of basic training for the Royal Marines. Our training troop has started with 36 men and by the time we were taking the final tests this number had been reduced to 19 by injuries (the weather had been appalling) and attrition (withdrawn from training), although nothing was said, I got the impression that our NCOs were under pressure to make sure there were no more drop outs.

The biggest challenge they had left was one guy (John) who was claustrophobic. As one of the physical tests consisted of a timed cross country run, that incorporated several obsticles made up of tunnels and pipes that John had never been able to complete, there was no way he was going to pass and earn his green beret despite being very fit and capable in all other areas.

The two parts of the course that had caused John problems were a water filled tunnel that you had to go through and a 100ft long 30inch concrete pipe. He had always frozen when traversing both these obstacles and had taken about 20 minutes to complete the passage through the pipe.

When the day of the final run through the Endurance Course came up we were split in to teams of three and the time was taken for the last of the three to arrive at the end of the course, this meant that the run had to be a team effort and it would be up to the two people teamed up with John to get him through somehow. I realised in later years that the NCOs knew we could get away with motivation methods that they could not!

I and a friend (Steve) had done fairly well in all the previous challenges and were both in contention for special recognition for leadership, so not surprisingly I suppose, we were teamed up with John. The odd thing that I remember was that we never even discussed what we were going to do; we just assumed that John would do what he needed when the time came.

The first of the obstacles we came to was the underwater tunnel, when we arrived; Steve and I just grabbed John, jumped in the water and held him down so the only way out was through the tunnel, not surprisingly, he went through in record time!

At the 30in pipe, every time John stopped, he was pricked in the ankle with a bayonet by the person following him, again a record result for the passage of the pipe!

Once these challenges were over it should have been and easy run back the few miles to the firing range where we needed to shoot accurately to finish the course, but I saw an interesting thing happen which I have remembered all my life. John had decided before he did the course that he was going to fail, and even though he had completed the two aspects that had caused him problems he was still convinced he would fail so he found he could not do the run home despite being a good runner.

He slowed down and would even collapse on the floor, saying he could not go on, despite the fact that he had previously run much further with no problems. Steve and I ended up carrying John's weapons and equipment whilst dragging him, and eventually when he collapsed on the floor, we would kick him until he got up and ran again. Finally, when the end was in sight, he got so mad with us he ended up chasing up back to the end of the course.

John passed the course and on the day he was awarded his green beret, he thanked me for helping him to get through.

I learnt then that it is possible to drive someone to be successful by force of character and that sometimes driving people hard towards a goal can work, especially when it is something that they really want.

Some time later I read of a different style of military leadership. I do not know how true it is but the story is that in the lead up to D Day, General Eisenhower met the men who would lead the first assault on the Normandy beaches. Each officer was given a piece of string and asked to hold the end, then to pull it round a model of the area they were to attack. They had to pull it up the beach and through the streets and roads of their area.

When they had all done this several times and beginning to wonder what was happening, General Eisenhower asked if everyone understood where the units needed to go, when they officers agreed, he then said "now try pushing your piece of string round the same route".

Obviously he was emphasising that they needed to lead from the front and by example, not by pushing from the back.

These are two very different approaches to leadership, and they both work. However, as part of being a leader is knowing when to accept the leadership of someone else, I know that I would definitely prefer General Eisenhower's example!
Posted by Clive at 9:46 am No comments: 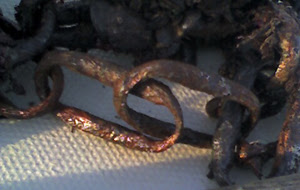 Over the weekend I was running a course in the Solent, Saturday was fine but over night the winds picked up to 55knots. Fortunately by the time we left the Hamble on Sunday the winds had dropped off to a more reasonable level.

Once we had cleared the harbour we noticed a yacht towing its mooring buoy and making about 2 knots across Southampton Water.

We were able to tow the yacht in to the Hamble and left it secured to the main visitors pontoon. Whilst we were waiting for the harbour master to check the boat over I inspected the mooring system of the yacht.

The mooring lines were of a good size, in good conditon and looked reasonably new, however the chain used for the riser was completely corroded through. The original chain must have been about 1/2inch but in places the ends of the links were down to about 1/8inch. Obviously in the storm the night before one of these links had failed and the yacht went adrift.

It made me wonder how often some people check their moorings. From the direction of travel and the tide, I think this vessel came from eitherthe Calshot or Powerstation Creeks where the moorings are privately laid.

Ideally the mooring should be lifted every year and inspected for corrosion damage, if you, your club or boat yard do not do this, do not be surprised if your boat is not where you left it after the next big storm!
Posted by Clive at 2:38 pm No comments: